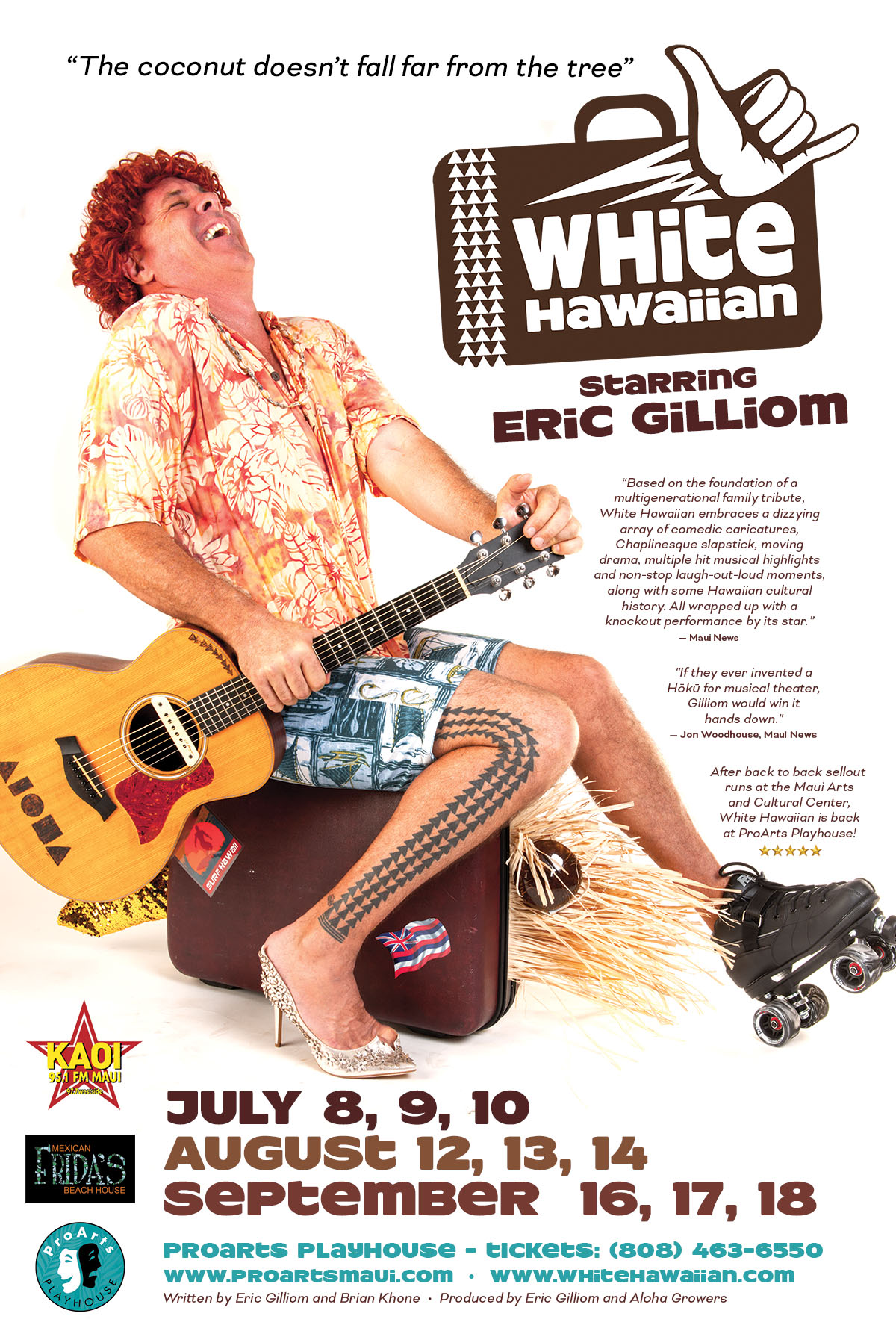 We were able to catch the opening weekend of the White Hawaiian, starring Eric Gilliom. We’ve known Eric a long time and have been able to watch his career throughout the years so it was really fun to watch him bring it all together into one hilarious musical performance. He’s really been able to make a memorable mark with this show and we enjoyed the little gems that only a local would know and appreciate.

The White Hawaiian is a smart and witty one-man show that first debuted in 2019 to sold-out audiences at the Maui Arts & Cultural Center. Following its initial success in 2020, White Hawaiian did it again at Mulligan’s on the Blue in Wailea with more sell-out shows and rave reviews. This summer, Gilliom will reprise his roles for two nights followed by a matinee each month at the ProArts Playhouse in Kihei.

The White Hawaiian was written by Eric Gilliom and Brian Kohne and is based on Eric Gilliom’s famous family history and Eric’s career as an entertainer. Furiously donning outlandish wigs with gaudy costumes, the story unfolds from his great grandparents to his grandparents on down to his parents then seamlessly into growing up with his six-time Grammy-nominated sister, Amy Hānaialiʻi Gilliom. The reliving of his career highlights and follies makes this a full-circle story that is rich and entertaining.

Eric is an award-winning musician and entertainer whose multi-faceted talents have taken him from his roots in Hawaii to performing live on the stages of Broadway, the Grammy awards, and the mainstream entertainment through his various concerts and appearances in films and television. He is currently the lead singer of Mick Fleetwood‘s House of Rumors Band based on the island of Maui. As a native Hawaiian singer-songwriter and musician, he’s won a prestigious Nā Hōkū Hanohano Award for best album with his partner Willie K as the Barefoot Natives. His versatility allows him to sing everything from Rock, Soul, R&B to Hawaiian and Broadway show tunes. He has played with and or opened for the “Who’s Who” of musical legends. Legends that include Earth Wind and Fire, Steven Tyler, John Legend, Willie Nelson, Jamie Foxx, Brian Johnson (AC/DC) and Michael McDonald just to name a few. A graduate of the Goodman School of Drama in Chicago, as an actor, singer and performer, Eric has worked with Debbie Allen on Broadway (Carrie & TV’s Fame), in television on the Jamie Foxx show, and on the big screen with Gene Hackman in Hoosiers. He also starred in the award-winning local Maui comedy, Get a Job.

ProArts Playhouse in Kihei was founded by Jonathan Lehman, a passionate lifelong champion of local theater. Jonathan set out to provide the Maui community with access to shows that might not otherwise be produced here and to compensate all those involved with these productions. In doing so, he created Maui’s first truly professional theater.

Occasionally we offer special promotions. Signup for our mailing list so we can keep you up to date.

©2021 Grace Vacation Rentals  -  Web Design: Aloha Growers
We use cookies to ensure you get the best experience on our website. Learn More.
Got It!